Iiro Rantala
My History Of Jazz 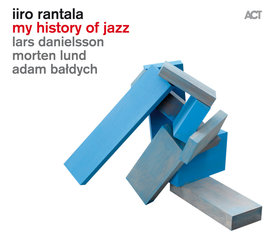 My History Of Jazz

Produced by Siggi Loch with the artist

“September Song” was played on the "Alfred Brendel - Steinway D" and recorded by Klaus Scheuermann, June 18, 2012 at the ACT Art Gallery in Berlin

“Caravan” was played on a Bösendorfer Imperial and recorded by Antoine Desmons, July 9, 2012 at the Montreux Jazz Festival (Petit Theatre / Montreux Palace), Switzerland

That old discussion has broken out again: What is jazz? Who does it belong to? Where does it begin? The latter of these questions is at least not an issue for the Finnish pianist Iiro Rantala: "Johann Sebastian Bach and his music came into my life when I was six." So it comes as no surprise that Bach ties up his new ACT album "my history of jazz" - Rantala's personal history of the music that captivated him when he was 13 is embedded in the classically rendered aria: "Ever since then I always wanted to become an improviser, composer, stage performer and bandleader". A universal concept shown on the five greatly varied improvisations on the Goldberg Variations, upon which Rantala threads the album like a string of pearls.

“My history of jazz" is the logical counterpart to Rantala's ACT debut "Lost Heroes", on which he built a unique personal monument to past musical paragons and kindred spirits – so unique, in fact, that it won him the Echo Jazz and the annual German Record Critics Award, amongst others. There too, the Finnish classical composers Jean Sibelius and Pekka Pohjola were of course also among the inspirations, as were the entirely dissimilar jazz piano legends Art Tatum, Erroll Garner and Michel Petrucciani. This time, great composers find their way into Rantala's kingdom, like George Gershwin ("Liza"), Kurt Weill ("September Song"), Duke Ellington and his valve trombonist Juan Tizol ("Caravan"), Thelonious Monk ("Eronel") and the Swedish cool jazz saxophonist Lars Gullin ("Danny’s Dream").

With "my history of jazz" Rantala places himself at the head of a new pianist generation that liberates itself from the inflated cult of the "all new" and instead returns to build on the old jazz tradition of studying the great inventors of the genre, of admiring them and of using them for one's own sound. "The great thing about being a musician is that you don't have to invent everything yourself," Rantala says. "You can listen to the people who were there before you and learn from them. Many people ask me what my influences are, who I like and who I've arranged for myself. I've always been very open-minded about that."

The five Rantala compositions on “My History of Jazz” are perhaps the hardest to get out of your head. Whether reanimating the romantic jazz tradition in "Americans In Paris" – which itself is based on the German and French Impressionists – or whether breaking down the swingbob rhythmic from hot to modern jazz as in "Bob Hardy"; whether he gives his minimalistic answer to the Nordic jazz revolution of recent years in the stirring "Smoothie", which is perhaps the catchiest tune on the album, or whether he makes his contribution to the escapist piano solos of the moment with "What Comes Up, Must Come Down"; even when he embraces pop with "Uplift",

Rantala always impressively demonstrates that he is a talented stylist, one who breaks down styles and reconstitutes them – borne by unrivalled technology. And that with an unprecedented versatility that he explains as follows: "I was never devoted to blues piano or what people call "mainstream jazz". That is why that is missing on "my history of jazz". Apart from that I don't think anybody can complain about a lack of stylistic variety on the album: There's baroque, ragtime, bebop and swing to be heard on it, Scandinavian melancholia, ballads with a French character, fusion, smooth jazz and even tango."

For this unique mix of various moods, focused entirely on melodies, Rantala found congenial comrades-in-arms: the delicate Danish drummer Morten Lund, who has proven his extensive understanding of jazz with, for example, Italians like Enrico Rava, Paolo Fresu and Stefano Bollani. Then there is the bassist, cellist and ACT star Lars Danielsson, who brings an unmistakable voice to the strings. And finally the most recent ACT discovery Adam Baldych, the violinist with not only classical training but also perhaps the biggest variety of tone qualities and the strongest expressiveness that jazz has ever had – just lend an ear to his plucked intro to "Smoothie".

For piano enthusiasts it may be a bonus that Rantala makes use of two other, fantastic pianos on this album, alongside the Steinway from Tia Dia Studios in Sweden's Mölnlycke: "September Song" resounds from Alfred Brendel's Steinway D, "Caravan" from the Bösendorfer Imperial from the Montreux Jazz Festival. That too awakens associations, and so Rantala's "my history of jazz" can be rounded off as one man's response to the much-discussed questions of the time: When a creative spirit condenses the history of music into one moment with outstanding mastery of his instrument, jazz can be the new classical.