Ida Sand
Meet Me Around Midnight 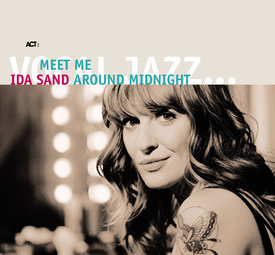 Meet Me Around Midnight

“IDA. A rare musical talent and a natural beauty with a radiant smile and golden red hair.
With the gospel in her soul, pure gold in her voice and soul in her body and yet, she is from Sweden of all places.
Born into a musical family, the father a singer at the Royal Opera in Stockholm and the mother a church musician, Ida has been surrounded by music and the love for it her whole life and you can certainly hear it in her performance.
The album you hold in your hand is not only a CD. It is like an oyster with a precious stone in it, waiting to be opened and cherished. Inside you will find her. She is just as warm as gold. IDA.”
Nils Landgren
Soul from way up north – is that possible? Ida Sand’s simple answer: It is. From the very first notes, the 29-year old Swedish singer/pianist’s debut album renders absurd the widely held concept that musical authenticity and ethnic background are inseparable.
Yet, this is not someone trying to copy a musical style. Ida Sand has her own roots. She moves easily within the idiom that we more usually associate with the likes of Aretha Franklin, Ray Charles or Stevie Wonder.
As a child from a musical family (her father a well-known Swedish opera singer, her mother still an active church musician), she showed an early interest for music. She started cello at eight, but soon switched to piano, and she sang in various gospel choirs in her youth. Gospel in Sweden – that begs an explanation.
After the late 60’s worldwide smash hit “Oh Happy Day” by the Edwin Hawkins Singers, Sweden was gripped by a wave of Gospel-fever – Ida’s first encounter with “black” music. “My parents introduced me to music by Per-Erik Hallin when I was ten years old”, says Ida. “He was a very in-demand gospel pianist, he even recorded with Elvis and accompanied him when he was touring. His sound captured me instantly. And then I discovered the old masters of soul, Aretha Franklin and Ray Charles.”
After her time as a student at a musical grammar school in Stockholm, Ida studied piano and voice at the academy of music in Gothenburg. She performed with some of the greats of the Swedish jazz scene, among them the band “Opposite Corner”. “Performing in front of an audience - that is what I have always wanted. I think that my time as a singer and pianist in a church choir really helped me on the way to that goal.”
Small wonder, that Ida Sand had soon acquired a reputation as a very in-demand singer. “I had often thought about launching a solo career, but the time didn’t seem right.”
Now the years of experience in a large variety of bands have paid off: Since the word has spread, that the German ACT label is the most successful producer of Swedish jazz music, the logical next step for Ida was to send a demo to Munich. Then everything happened very quickly: The label’s boss Siegfried Loch introduced Ida to Nils Landgren, who soon booked some studio time with the singer in Gothenburg.
These recordings show Ida Sand’s full potential. Meet Me Around Midnight is an album by a singer who pays a lot of attention to the arrangement of each individual song: “Nils and I wanted the album to be about the lyrics and the singing. This is not to say that I don’t like a good guitar solo, but when it’s about songs and singing, then the music should reflect this emphasis.”
Consequently the arranging focuses on the groove, interpreted differently for each of the 13 songs by Ida and her excellent band. Dark and menacing in her original “Brutal Truth” (Ida: “A party song; I hope the people enjoy it”), or with ample blues feeling in the standard “One For My Baby” (“It’s an old Sinatra favourite, but I prefer Etta James’ version, it has a much earthier feeling”).
Thus, when there is a solo, it carries even more weight. Supported by Nils Landgren’s pronounced trombone playing, Ida’s soulful singing and gospel-inspired piano playing adds new highlights to the old Motown ballad “Every Little Bit Hurts”; the song made popular in Europe by Steve Winwood and the Spencer Davis Group in 1965. She reminds us poignantly where the origins of soul lie – in the church. “It would be inaccurate to call me a Swedish soul singer. I guess the Swedish tradition is just as easy to make out in my music, the tradition of Wilhelm Stenhammer, who wrote a lot for choir, also Hugo Alfvén and Wilhelm Peterson-Berger. I grew up listening to them. The intensity of their music has left a deep mark, and I hope to convey some of this intensity through my music.”
There can be no doubt about that; Meet Me Around Midnight is not an offer that one could easily refuse.