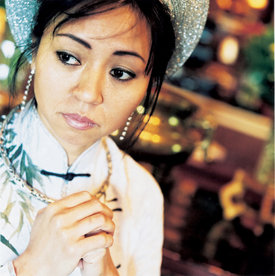 Born in Saigon, Viêt-Nam, Huong Thanh comes from a family of renowned traditional musicians. Her father Huu Phuoc ( † 1997) was one of the most famous singers of Cai Luong, Renovated Vietnamese Theater, a kind of opera which mixes traditional singing, dance and theater. Cai Luong was created in 1916 by a group of southern music lovers, with the heritage of traditional theater styles from the north, Hat Boi and Hat Cheo, southern chamber music and the introduction of elements of french music. Cai Luong was very popular from the 30s on. Unfortunatly, the young generation in Viêt-Nam is losing interest now. Huong Lan, Huong Thanhs sister, now established in USA, is also one of the most famous Vietnamese singers, in Cai Luong as well as in traditional and modern music.

In Vietnamese singing theres a special and very strong relation between melody and words: there are six linguistic tones, and the same syllabe can have different meanings depending on the pronounced pitch. The poetry of the text has its internal melody, and the singer has to convey the emotions of both. Huong Thanh embodies the particularities of the Vietnamese traditional singing, full of detailed inflections, ornements, finesse and diversity of expression and timbres.

At the age of 10 Huong Thanh began to learn Cai Luong and traditional singing in the family context - her parents house was always full of visiting singers and musicians, who also acted as her teachers. At 13 she perfected her skills in studying intensively in Saigon music and theater schools, and at 16 she performed on stage for the first time.

Since her move to Paris in 1977, she has taken part in several shows of Cai Luong theater with great traditional artists -including her father- in the Vietnamese community in Europe (France, Germany, Switzerland and Belgium). Each time Huong Thanh  returned to Viêt-Nam she has worked for several recordings which include the best musicians of the country.

In 1995 she met Nguyên Lê who brought her to the world of jazz, a music she had never performed before. The adventure of Tales from Viêt-Nam  began: the band has toured in the most important festivals of France, Italy, Germany, Portugal, England, Switzerland. The CD (1996, ACT 9225-2) has received a great welcoming from international critics : Diapason d'Or, Choc du MONDE DE LA MUSIQUE, Choc of Year 1996 JAZZMAN (France), 2nd best CD 96 for JAZZTHING (Germany), Best CD 96 on radio TRS 2 (CH), "a minor masterpiece" JAZZTIMES (USA).

In 1996, in Banlieues Bleues festival, Paris, Huong Thanh was part of a complete show where traditional and contemporary Vietnamese dancers were integrated to the Tales from Viêt-Nam orchestra. She performed as a singer, as usual, but also as a dancer (the traditional sword dance of Trung Trac Trung Nhi, two sisters heroines of Viêt-Nam, training their troops for battle). The same year Huong Thanh was invited to sing for the celebration of the anniversary of the declaration of human rights at the UNESCO. In 1997 she recorded in Los Angeles, USA, with her sister Huong Lan. In 1998 she appeared on Maghreb & Friends  (ACT 9261-2), Nguyên Lês last CD, on Louanges, a song by Algerian musician Karim Ziad. After translating the words from Arabic to Vietnamese, she sings the replica to the North African singers.

After several months of work, she presented Moon and Wind, her first CD for ACT, produced, written and engineered by Nguyên Lê. A peaceful celebration of all the aspects of love: child love, with lullabies from different regions of Viêt-Nam, parents love, love of the one who will share our life, love of the far away homeland.

In 2001 Huong Thanh followed up with her next ACT album Dragonfly, also produced in close cooperation with Nguyên Lê. As in the case of Moon and Wind she is accompanied by musicians from widely varied backgrounds as Paolo Fresu and Tino di Geraldo. Renaud Garcia-Fons, Etienne Mbappé, as well as Richard Bona, with whom she sings a duet, join the band for this production.. In January 2004 her latest album will be released: Mangustao (ACT 9423-2) – a world music highlight with Nguyên Lê, Paul McCandless, Paolo Fresu, Dhafer Yussef, etc.