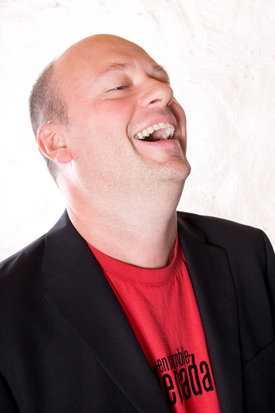 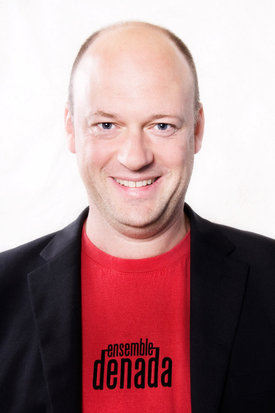 Compared with the innovations and explorations seen amongst small groups, there have been surprisingly few changes in the big jazz orchestras since the end of the big band era. If you look for new approaches you automatically end up in the far North: Norway has established itself as a stronghold of big ensembles promoted by leaders such as Trygve Seim, Geir Lynse and, of course, Helge Sunde. The 44-year old from the small town of Stryn is, to a certain extent, the “universal soldier” of Norway’s orchestral scene, adept in all areas of playing, composition and performance. A lecturer at the state music academy and other universities, Sunde has made a name for himself as a composer for classic symphony orchestras and modern ensembles. He is proficient on several instruments, particularly the trombone, and can be witnessed live in groups such as the Norwegian Radio Orchestra, Geir Lysnes’ Listening Ensemble and the Ophelia Orchestra as well as fronting his own bands.

Helge Sunde makes “lateral thinking vital and passionate fun” (Jazzthing). “The orchestral performances of the composer and brass musician, Helge Sunde, are complex and furious with a great awareness of detail and sounds,” writes Fono Forum, describing the sophisticated arrangements and accomplished sounds on the artist’s 2007 ACT debut Denada. Together with the Norske Store Orchestra, “a grooving and rousing music experience” (Jazzpodium) has been created here.

With the subsequent album, Finding Nymo, the ensemble has now inherited the name Denada, derived from the Spanish and with several meanings: “coming from nothing” as well as “you’re welcome” - it is an open-ended call for spontaneity.

Once again, Sunde invites listeners to enter a musical kingdom which has offered up its riches like a horn of plenty, in which his diverse preferences and creative areas of work kaleidoscopically unfold themselves. In Finding Nymo, Sunde is primarily interested in rhythmic and dynamic processes and creating classical jazz music. Despite the fully independent sound structure, his Ensemble Denada remains very close to the big band tradition. Virtuoso guests such as Marilyn Mazur (who has also worked with Jan Garbarek) on percussion, pianist Olga Konkova as well as numerous regular experienced Norwegian orchestra musicians and several band members from Geir Lynse, all make Sunde’s ideas, sometimes light as a feather and at other times much more profound, come to life in a truly masterful way.

The closing “Lullaby Of Broltesia” is almost like an epilogue on the history of big jazz ensembles: a dreamlike (and, ironically, derived from a sleeping person’s breathing) musical wonderland arises from the irresistible melody which sounds as if it could come from both Grieg and Ellington. Sunde outlines his ideals behind this composition with a wink and a wry smile: “In this world everyone listens to big band jazz, musicians receive free flight tickets and artists don’t have to pay taxes.”

Before we get to Sunde’s fantasy world, we are presented with the brief poetic score “One Word”, introducing us to the first half of Finding Nymo, which resembles a musical road movie. Sunde ingeniously presents impressions of his European tour of 2007 for the Ensemble Denada whereby the humorous arrangements correspond to the wittiness of titles such as “Molto Alghero” and “Valse Trieste”. A stopover at the “Jazz am Bauernhof” on the Austrian border is reflected in the jaunty, rhythmically pointed “Obstler” which almost appears to take on the legacy of the Vienna Art Orchestra. “When In Rome”, a reflection of the incredible traffic in the Italian capital, picks up on the dynamic of the classic American big bands, illustrated with authentic traffic noise.

A potpourri of childhood memories: “Bryk”, for example, a Norwegian dialect expression for “noise”, is dedicated to the enthusiasm of his grandmother for his early instrument playing. And also his love of chess, puzzles and anagrams (“MoonCrier”) and dedications to his family define the second half of the album. The title track is dedicated to his outstanding saxophonists, Atle and Frode Nymo, with the wordplay on “Finding Nemo”, and brings be-bop to the present day with fast-paced, abstract improvisation and electronic sounds.

Finding Nymo is the musical calling card of a magnificent orchestra, but above all it is a brilliant and exciting portrait of one of the most creative talents of the European scene – Helge Sunde.