Heinz Sauer
If (Blue) Then (Blue) 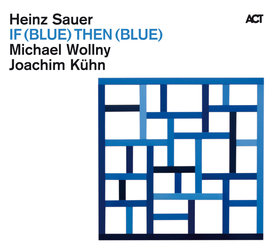 Blue delights: IF (BLUE) THEN (BLUE) - for the first time, Heinz Sauer has recorded with Joachim Kühn. Together with Michael Wollny, they have created an exciting homage to Kind Of Blue.

“Jazz is here alive again.” “Magical miniature versions for eternity.” “A strong duo!” – this is how the press celebrated the two most recent ACT CDs from saxophonist Heinz Sauer and pianist Michael Wollny – Certain Beauty (ACT 9442-2) and Melancholia (ACT 9433-2). A duo which caused a furore not only because of the 46 year age gap of both musicians but also because of the wide creative scope captured in this encounter. On the one hand, the wise and experienced saxophonist (born 1932) with the concisely dazzling sound and on the other, the young “conqueror of the keys” (born 1978) with a broad musical vocabulary going in all directions. It wasn’t by chance that Melancholia won the “German Record Critics’ award” and Certain Beauty won the “CD of the Year award” from the French Jazzman magazine in 2006.

For Heinz Sauer both of these CDs were an important late success in a rich, yet rarely so highly awarded, long musical career – they were in fact his most successful CDs. To continue the exciting and sprawlingly-beautiful duo aesthetic of these recordings, producer Siegfried Loch put the idea of an expanded version into reality. He brought in a further partner for Heinz Sauer who here alternates with Wollny – pianist Joachim Kühn (born 1944) who had only just previously had a huge success on ACT together in a duo with Michael Wollny (Live At Schloss Elmau, ACT 9758-2).

Like Sauer, Kühn has established himself as one of the great figures of German jazz for decades yet both these figureheads have never recorded together. Now they are finally joining forces, and in a particularly inspired way. In the year of the 50th anniversary of the great jazz classic, Miles Davis’ Kind Of Blue, Siegfried Loch suggested they both do a recording in response to the special workshop atmosphere and musical density of this milestone work. IF (BLUE) THEN (BLUE) is their joint venture, musically as profound and spectacular as the artist consortium itself.

Yet you will not hear a trio play here. Instead, the pianists are heard alternating with each other when playing alongside Sauer. The back-and-forth nature of this alternation is not competitive; rather they mutually and respectfully complement and inspire one another. Heinz Sauer talks of a “session with many spontaneous moments.” The recordings with both partners were not made on separate days but instead, the three musicians were always present, and in this way Kühn and Wollny were always able to respond to what the other had played previously. Sauer: “The order of the tracks on the CD is in the order in which they were recorded and so the listener is able to experience the adventure of the work’s unfolding.” As a very specific homage to Miles Davis’ Kind Of Blue, three tracks from that great classic also appear here: “All Blues”, “Flamenco Sketches” and “Blue In Green”.

Heinz Sauer is presented here in a brilliantly exciting juxtaposition, with two partners with very distinctive profiles. On the one hand you have Wollny who subtlety combines universal piano nuances ranging from romantic gloom to the brusquely clanging new sound world. On the other, you have Kühn – full of energy, the eternal “Sturm und Drang” musician, expressing strong emotions and a master of the explosive turbulence and heartfelt beauty of sound.

Both musicians are far removed from being streamlined. They are characterised by intensity, by expression without compromise, and by their very own sounds. Yet there are differences: “For Michael the word jazz is far too confined; when I play with him everything is open. With Joachim, on the other hand, you can feel the old jazz tradition more,” says Heinz Sauer.

In their unwillingness to compromise and the intensity of their expression, both pianists join separately but amiably with the saxophonist. Sauer is a musician who is able to change the tonal nuances of his tenor saxophone in a split second. His sound flows like lava – glowing red, then cold, forming craggy formations. His instrument rumbles and cheeps, bells and “sands”, whimpers and shrieks. He is able to conjure the full volume of a foghorn as well as an effervescent warbling gentleness, both arising so quickly and succinctly from his instrument that the listener is forced into changing paths of emotions. No other saxophonist in the world plays like Sauer.

The peer of musicians such as Albert Mangelsdorff, but also of Michael Wollny, this long term contemporary, who understands how to condense a career spanning half a century into only few sounds, is truly unique. And he is here at his best – in an exciting union of world class German musicians, at a summit of the generations and inspired by a great classic. IF (BLUE) THEN (BLUE) – if you’re going to do something like this then you might as well go all the way!