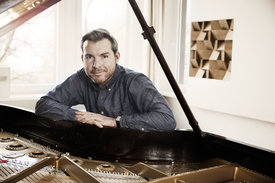 Chick Corea simply calls him an "original. A creative genius", while Jamie Cullum raves about his playing: "I'll be watching our finest young piano-player Gwilym Simcock." Born 1981 in Wales, Simcock – now living in London –is undoubtedly right at the top of European jazz and considered one of the most gifted pianists and imaginative composers on the British scene. He took classical piano lessons at one of England's most renowned music schools from the age of three, building up a musical background that defines his playing to this day. He certainly could have become a successful classical pianist if he had not discovered Keith Jarrett's and Pat Metheny's music by the age of 15, finally drawing him into jazz. Having completed his studies at the Royal Academy of Music he is able to move effortlessly between jazz and classical.

Simcock was acknowledged as a great talent very early on and soon got to play with stars like Dave Holland, Lee Konitz, Bob Mintzer and on Bill Bruford's "Earthworks". Winner of the Perrier Award, BBC Jazz Awards and British Jazz Awards in 2005, Simcock was the first BBC Radio 3 "New Generation Jazz Artist". He also was voted "Jazz Musician of the Year" at the 2007 Parliamentary Jazz Awards.

The release of his ACT debut "Good Days at Schloss Elmau" (ACT 9501-2) early in 2011 marks his final breakthrough. Along with recordings by Adele, Katy B and James Blake, the solo piano album was nominated for the prestigious Mercury Prize as one of Great Britain's 12 best albums of the year. His music has been widely acclaimed as 'engaging, exciting, often unexpected, melodically enthralling, complex and wonderfully optimistic' – and it is exactly his harmonic sophistication and ability to creatively combine a vast array of musical traditions to a very unique and highly energetic narrative that fascinates people.

Like a weaver combining all sorts of different threads to one beautiful drapery; Simcock fashions his musical identity out of reminiscences from Mozart, Bach, Chopin, Ravel, Gershwin or Ligeti, Shearing, Monk, Evans, Peterson – and of course Jarrett. In collaboration with saxophone player Tim Garland and percussionist Asaf Sirkis, Simcock goes even further in combining different musical traditions on his most recent ACT album "Lighthouse" (ACT 9525-2).

Together they sound out all imaginable possibilities of this unusual instrumentation and form a unique miniature orchestra in skilfully interweaving strong distinctive melodies, complex harmonies and bounding folk-tinged rhythms along with many other influences from around the world. German radio station BR Klassik praised the album as "a virtuous and energetic variety of styles all of a piece." - A judgement easily to be applied to Simcock's playing in general.