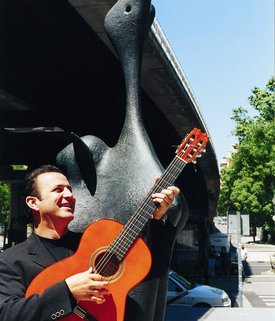 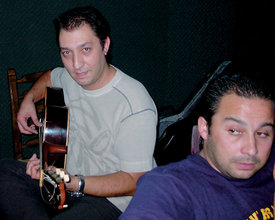 If fifteen years ago Paco de Lucía had met a collection of young talented and, above all, innovative flamenco guitarists, and then had been able to bring them together to record an album, guitarist-composer Gerado Núñez would no doubt have been one of them. As was true with earlier generations of flamenco guitarists, so it was during Núñez’ youth that such support was missing. Núñez, who was born in 1961 in Jerez de la Frontera, Spain, wanted to lend his support to the new  generation of promising players. In early 2002 he invited five guitarists between the ages of 15 and 31 to come with him into the studio, and together work on and record some of their compositions. The results are 13 pieces, including one from Geraldo Núñez. The ensuing 67 intense, stylistically kaleidoscopic minutes make it clear that the baton which revolutionary flamenco guitarist Paco de Lucia once held and then passed on to his young colleagues has long since been in good hands.

Compared to its historical predecessors the "New School of Flamenco guitar" is more diverse and individualistic. The evident developmental jump in flamenco occurred in the middle of the 19th century during the high-point of the so-called Cafés Cantantes. During this period instruments that had been used solely as accompaniment to the singers began to make their presence felt. The guitarists’ increasing virtuosity finally brought to flamenco guitar playing deserved recognition as an art form that stands on its own. What Ramón Mantoya with his neo-classical flamenco guitar style achieved in the first half of the 20th century for the toque (flamenco guitar playing) Paco de Lucia later carried forward with his original, up-to-date style.

De Lucia’s greatly expanded harmonic and rhythmic range allowed the incorporation of other musical styles and traditions into the music - and with it the alluring prospect of greater artistic freedom for every open-minded player. Yet it needs to be intelligently handled. There are some younger guitarists within the greater flamenco family who, while not lacking in talent, are missing a "certain" feeling. Others have a desire for experimentation  and improvisation without having acquired the needed knowledge of the basics. And then there are the musicians who, with the necessary portions of hard work and patience, have put everything together. Gerardo Núñez’ "pupils" are such musicians, musicians "who - although they still have a hard fight ahead of them for the recognition of their music -work like the devil; they’re continually learning, and they practice non-stop. My personal desire as guitarist and musician was to present the work of these young flamenco guitarists; that’s what brought me around to tackling this project". Despite the difficulties that Núñez mentioned, the comparably short professional paths of the five musicians were lined with all sorts of impressive projects and honors .

From Algeciras, 23-year-old José Manuel León is, along with Núñez, the only Andalusian in the group. His three pieces - a Fandango, a tanquillos, and a Soleá, sparingly outfitted with percussion, palmas (rhythmic hand-clapping), and/or electric bass - open the CD. León started working as a professional musician in 1995. Within a year he was playing with ensembles touring Europe and Asia. Likewise he was in demand as a studio musician, and continued to show up in pop music contexts that had little to do with flamenco. In the last years he has gained live playing experience working with such well-known flamenco singers as José El Francés and Carmen Linares, whom he accompanied together with Gerardo Núñez.

From Madrid, 27-year-old Antón Jiménez experienced his professional initiation at the side of the well-known cantaor Dieguito "El Cigala".  From there it went from one challenging project to the next - whether it was with dancers Joaquín Cortés, Merche Esmeralda, and Carmen Cortés, or with singers like Potito and Remedios Amaya - diverse experiences which clearly were the best possible preparations for his soloist goings-on - as the stylistically and atmospherically varied compositions on this CD affirm.

Cano, alias Juan Antonio Suárez, is in his early thirties; originally from Barcelona, he currently lives in Madrid. He earned his spurs through his many years’ work with such outstanding dancers as Merche Esmeralda and Belén Maya. His diverse facets as talented composer are presented on the three open and airy pieces arranged solely for guitar.

José de Rosaria was born in Madrid in 1978. José has his father to thank for his taking up the guitar at the age of five. The at 15 the child prodigy was working with dancer Antonio Canales’ ensemble, and his talent is requested by the most important practitioners of the modern cante: José Mercé, Ramón El Portugués, Miguel Poveda, Remedios Amaya, et. al. Like his college Cano, he has worked out a piece for this CD that is in the old seldom played flamenco style of the Rondeña in which only a violin joins the guitar.

The young Barcelona musician Vicente Cortés introduces himself with a catchy Rumba; his skill at playing memorable melodies could already be heard in countless Dance projects. Such projects included those of his aunt, Carmen Cortés, the artistic and life partner of Geraldo Núñez - a situation that once again is very much the within tradition of the flamenco family...thus, a very weighty Seguirilla closes the circle, showing how sympathetically close master and pupil can sometimes be.