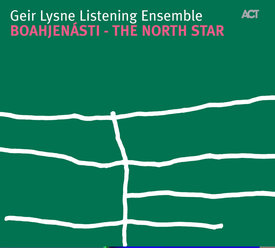 Yet again this big band shows its capabilities to surprise with something new every time. It is immediately recognisable through its unconventional, absorbing yet unambiguous approach. Their leader is absolutely uncompromising. Norwegian Geir Lysne, born in 1965, manages to create a uniquely radical sound and yet with his pieces still remains very accessible. It’s like a solved paradox. On his new CD  "Boahjenásti – The North Star" you can hear a continuously unexpected but satisfying mix comprising everything from various electronic elements through jew’s harp to traditional Norwegian singing. Lysne raises the intensity one level further than in his previously praised ACT CDs "Aurora Borealis" and "Korall" (ACT 9406-2 und ACT 9236-2).

Geir Lysne’s Listening Ensemble made its international breakthrough at the 2001 Jazzfest Berlin. "Staggering momentum", "unbelievably dynamic range" but also "a precision which made the enormous complexity of the arrangements seem feather-light and airy" were the comments of Werner Burkhardt und Ulrich Olshausen in German daily newspapers Süddeutsche Zeitung and Frankfurter Allgemeine respectively.

This could be the result of a saxophonist being shut up for a long time within his four walls! Geir Lysne had been staying at home to mind his children while his wife completed her university degree. Sometime during this period he started to compose  and founded his Big Band, for which he received his first acclaim.

Music for all the senses but also for the brain – that’s the best way to describe "Boahjenásti – The North Star". The title tune is by Johan Sara, Jr. from Norwegian Lappland. Johan Sara, born 1963 in Kautokeino, Finnmark, belongs to the new generation of traditional Sami overtone singers, the original inhabitants of Lappland. This vocal style is called "Yoik". It sounds guttural and raspy, is related to yodelling and is wordless, just like jazz scatting. It’s also partly improvised. It often pushes towards the link with nature, in particular the landscape of Lappland and its wild animals. In Kautokeino, Johan Sara’s home town, a "Sami Grand Prix" takes place every year with local singers. Johan Sara can be heard clearly on Geir Lysne’s arrangement of his song – in moments of incredible sensual plasticity. Of which there are many on the CD anyway.

What makes Geir Lysne’s Listening Ensemble different from other bands is not just the line-up (with additional flutes and two percussionists): it’s also the absolutely seamless relationship between usual big band and experimental sounds – both taken to the highest levels. Tradition and modernity have rarely merged as well. It all achieved so successfully, whether Yoik and sampled keyboard sounds, sharp-edged horn sounds and free solo eruptions: the cooking big band energy seems totally at home in cool Lappland. The basics and the finely wrought, the wild outbursts and the contrapuntal order, the simple vocalisation and the intricate complexity: all come together naturally and without artifice.

The album’s centrepiece is the three section "Nor Id Suite", which uses a contemporary big band to create a sound portrayal of Nordic identity (or at least intimates absorbing and convincing possibilities). It also has pieces such as "The Zoo Ballet" or "GeirG". "Old/New House" was originally composed for the NDR Big Band. "Kaa" instantly achieves a link to the famous snake of Kipling’s Jungle Book. As ever, whenever the snake surfaces, the tension mounts noticeably.

"Boahjenásti – The North Star" creates an adventure for the listener with many memorable moments: a journey through the world of music from Lappland and back again via many of the regions of the jazz world away from the mainstream. And those who embark on the journey will experience aural pleasures, which will often take their breaths away. Music from a "Listening Ensemble", indeed.