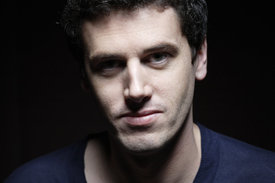 “There are times,” says pianist Frank Woeste, “when I think how useful it would be to have a third hand.” That thought seems to encapsulate an important trait in Woeste's playing, namely his natural urge to arrange and to orchestrate at the piano, something which is evident right from the start of his album “Pocket Rhapsody.” Woeste is not just an exceptionally fine pianist and a gifted exponent of the Fender Rhodes, he also has a thorough understanding of his own creative process. If all art is about leaving an impression, then Woeste's mission is to etch a deep mark both as a player and as a composer. His debut as an artist on ACT, then, not only reveals a musician brimming with ideas, but also a fully-fledged composer and an extremely adept arranger. His trio with guitarist Ben Monder and drummer Justin Brown creates a sound which is orchestral in its scale and its impact. The intimacy of chamber music goes hand in hand here with the forward propulsion of a jazz trio, and with the power of a big band. In other words, the title “Pocket Rhapsody” gets it right.

People who know the French jazz scene well have been aware of Woeste's exceptional qualities for a long time. He is one of the few German jazz musicians to have become a recognized name in France. The pianist, now 39, has received praise from critics and wowed audiences as a member of the bands of French trumpet heroes Ibrahim Maalouf and Médéric Collignon, or alongside Stéphane Belmondo, Michel Portal, Sylvain Luc or Flavio Boltro. He even had an early spell as the pianist in the very first band of singer Youn Sun Nah. It was through the connection with Nah that Siggi Loch eventually became aware of him, which has led to him being welcomed in as a member of the ACT label family.

Woeste's name has until recently been a closely guarded secret among insiders - the broadcaster WDR recognized him not long ago as “one of the best German jazz pianists.” Woeste was born in 1976 in Hanover, into a highly musical family. “Everyone played an instrument, and we made all kinds of music together as a family, from chamber music to jazz standards,” he remembers. “I tried out all kinds of instruments, drums, clarinet, flute and accordion. I ended up with the piano…and stuck at it.”

His experience as an exchange school student in the US solidified his interest in jazz. Before he had completed secondary school, he had enrolled as a junior student at the University of the Arts Bremen. He played in bands on the local scene, had a stint with the regional youth jazz orchestra in Lower Saxony, and was also pianist with the German National Youth Jazz Orchestra (BuJazzO) until 1999. However, two years before that, in 1997, he was accepted as a student at the Conservatoire National Supérieur in Paris (CNSM). Paris is where he has found both musical and personal fulfilment, and where he stayed to live.

Woeste's style probably owes its individuality to his experience of more than one culture. Notably, Arab and Asian influences have stayed with him, following trips under the aegis of both Cultures France and of the Goethe Institute. In his music are to be found the ideas of French “folklore imaginaire,” with structures from classical composition, drum'n'bass, funky syncopation, American improvised jazz from its heyday, and avant-garde electronica. Combined together, they make “Pocket Rhapsody” into a masterpiece.

On this album a kaleidoscope of different tonal colours, a mighty chorus of sounds is progressively revealed. These are organized and integrated by someone with a precise knowledge of how to use and to combine both acoustic and electronic instruments. The listener will hear this to good effect in the directive energy of “Buzz Addict,” informed with prog-rock attitude, or in “Interlude,” a quiet piece in which Ben Monder's electric guitar has the dominant role. Further evidence is to be found in “Melancholia,” a classical ballad with strings added, and perhaps above all in the title track, which contains all of these different strands, which culminates in a savage crescendo, and then falls back into silence.

Woeste is not short of eminent companions for this voyage. Youn Sun Nah sings “The Star Gazer” with the kind of captivating emotional intensity that might be expected of her. Ibrahim Maalouf contributes his incomparably expressive, oriental-tinged trumpet lyricism to the glistening “Moving Light” and to “Nouakchott,” a magical and richly evocative whirring of warm air over the desert sand. The time has come for Frank Woeste to be re-discovered in Germany as a prodigal son, and to be recognized more widely as a prodigious talent.