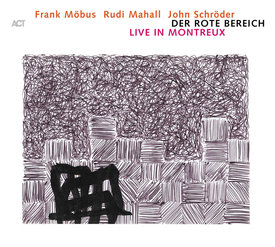 Listening to jazz appeals to the love of danger within us: the danger that makes some people want to skydive, row the Atlantic or climb mountains. For many of us a sort of "risk voyeurism" is enough, where we watch a motor race in the hope that there will be accidents but no death. So, with jazz, the audience is led on an unpredictable aural musical journey and has to place its trust in the band as its guide. But we have one great advantage when we go on a jazz "journey" compared with, say, a real mountain climb. We can categorically affirm that no-one gets killed!

Hearing Der Rote Bereich is the pure synthesis of going on such a journey - the name, the approach and the line-up make you hesitate about entrusting your life to them.

First, the name. "Der Rote Bereich" means "The Red Zone". Red is the colour of danger. And both Germany and music both have had their Red Zones: whether the red zone indicating distortion on the recording dial, or East Germany before the Berlin Wall’s collapse. Next, if you are not a native German speaker, you probably won’t know what all of the titles mean. But through these titles the band asserts its context in terms of location as much as sound. They prove that this music could only come out of Germany. And you are here dealing with three masters, who are technically totally in control of their instruments but also of the creative interplay that makes jazz such a rewarding and satisfying music.

Finally, we are not dealing with a traditional jazz trio line-up in any way. Through avoiding the use of a bass, so often the lynchpin of any jazz formation, leaves you worrying about how you will get through the music. Thus, in advance, attending a concert by Der Rote Bereich (or putting on a CD) is a leap into the unknown but also a leap of faith. You are intrigued, and possibly worried.

And yet. As soon  as the music starts, you know that you can rely on the three of them as your guides. The mesmerising nature of their performance is particularly clear when you get the chance to hear them live as on this recording. The music contains humour, intensity and is beguiling. Despite the lack of a true bass, it is shown to be not essential in this music, being replaced at different times through the use of the bass clarinet, the guitar, and even through the melodic drumming. But much of the time, it is implied by the music and this flexibility gives the music a unique flow and movement. The energy of their performance transcends a music of great potential complexity and intricacy, making it accessible and listenable.

There is something about Der Rote Bereich which makes it particularly German and not just through the name, use of language and titles. These just confirm the nature of the group. Perhaps, it is a result of the members’ international awareness of their German origins and makes the music something that can only come out of a country which has a pivotal status in Europe, both in terms of its history and geography.  They have all three spent time working with great musicians throughout the jazz and improvisation worlds as well as in the "cradle" of jazz, the U.S.A. Thus, when it comes to their working together as German musicians, they can work their heritage into the music and communicate it effectively. For example, Frank Mobus is also a regular performer with Portuguese Carlos Bica and is constantly absorbing new sounds and influences. Schroder’s delicacy and breadth of musicality perhaps also reflects his ability on so many instruments - not just a drummer, but also a guitarist and pianist of great imagination. Meanwhile, Rudi Mahall has proved himself to be the master of his instrument in a variety of contexts, such as in his duo with Aki Takase.

A result is that Der Rote Bereich has by now achieved near legendary status among their musical peers and contemporaries. When they played for the first time in London, the audience was a "Who’s Who" of contemporary jazz in the U.K. today, fighting for best seats in the house. The tension and excitement as they veer between melody, groove and free improvising episodes is gripping. And, with this CD, the listener can relive the journey as soon as it is over, by replaying the CD again (and again and again...)

We have with this recording here the proof of why Der Rote Bereich is blazing a trail for new and unique sounds out of Germany. We are lucky to have such guides who can lead us up a musical Mount Everest (or rather Zugspitze?) but make us believe that we are taking a stroll with them in the park.