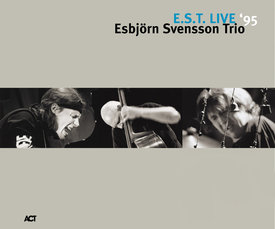 Recorded by Åke Linton in March 1995, except # 11 recorded by Manu Guiot at Montreux Jazz Festival July 16, 1999, # 5 by Per Åke Hermansson, Radio Dalama and # 6 by Verner Kjersgaag, DR Östjüllands Radio
Mixed by Åke Linton at Bohus Studio
Produced by e.s.t.

They have been lauded as the "New sound in the Old World", and as "high voltage out of Sweden"; the group has been called "possibly the best jazz trio in the world". The Esbjörn Svensson Trio’s - known as EST - rise to the heights has been almost frightening. After their first major success in Sweden, their international breakthrough came in 1999 during the ACT World Jazz Night at the Montreux Jazz Festival. In the following years EST was a sensation throughout Europe, and they are now on the path to continuing their success story in the USA. It’s no wonder that, especially when playing "live", EST lets loose an almost unbelievable energy - and this energy appears to grow from tour to tour - a rising star that shines ever brighter.

Stars sometimes shine much longer than one would think. And here are recordings that demonstrate this is true for EST. The band, which was first formed in 1993, quickly found their very special sound. However, at first, no one outside EST’s homeland was aware of them. Six years ago, in 1995, when Esbjörn Svensson still had long hair, and wore a headband, a record titled "Mr. And Mrs. Handkerchief", which consisted of live air shots from various towns in Sweden, was released. A year later, EST recorded the album "Esbjörn Svensson Trio Plays Monk" (recently re-released as ACT.). It reached the undreamed of sales of 10,000 CD’s nationwide. Those who have heard how the trio played back then can attest that it was breathtaking music (for a quick listen: track 5).

Much of what characterizes EST’s play today was already well-defined in 1995: the unity and riveting strength of the inter-play, the compelling themes - themes that immediately jump out at the listener, and yet are never burdened with cliches. Then there are the musical influences of the likes of Thelonious Monk and Kieth Jarrett, which are fused into a unique style that is again and again infected by the forward-thrust of rock. Magic moments are preserved for posterity in these live takes. In tracks three and seven, Svensson plays on an upright piano that doesn’t even come close to the brilliance and clarity of a concert grand - and yet, these recordings are pearls. The trio had by this time mastered the ability to react spontaneously to the inspiration of the moment.

Absolutely no difference from today? On their latest tours EST sounded tighter, less raw, with the impetuosity of wilder times more under control. Comparison with the masterpiece "Dodge the Dodo" from the 1999 Montreux concert (bonus CD) shows that the trio’s development has not been by leaps and bounds, but has been a continual process. Esbjörn Svensson himself has stated most clearly how much the music from past periods influences the band; "Obviously we develop all the time, both as individuals and as a group. But development isn’t only about blind process. So instead of just going forward, in places we’ve chosen to refer back to our earlier sound, to what we had on our first two albums." That’s already reason enough to pay new attention to "EST LIVE ‘95".