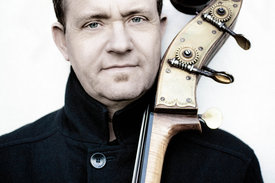 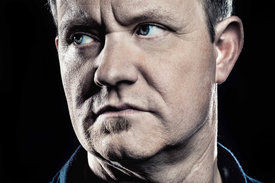 Cover art: © Georg Baselitz used with permission of the artist

Jazz and classical, Dieter Ilg knows both worlds well. Partly to learn about the history of music, he studied classical double bass at the Freiburg music academy though he had decided to become a jazz bass player at the age of 16.

Now one of the leading jazz bassists in Europe, Ilg has occupied himself for years with Guiseppe Verdi, a contemporary and Italian Counterpart of that most formidable, gigantic, and definitely most German of all opera composers, Richard Wagner. In a trio with pianist Rainer Böhm and drummer Patrice Héral, his subtle and unique interpretation of the famed Verdi opera "Otello" in a studio recording and in the ACT live version "Otello live at Schloss Elmau", Ilg elicited rave reviews from critics and audiences alike: "It has been a long time since a trio has seemed as intertwined with each other as this one," adjudged the NDR broadcasting company. "If not already the case, Ilg, Böhm and Héral are now at least a perfect example of unfettered music making," wrote Jazzthing. Norway's Jazznytt magazine summed it up with one word in its CD critique: "Beautiful". And consequently the double bass player was then honoured with the Echo Jazz Award 2011.

So it wasn't a giant leap from Verdi to Wagner, and least of all to his last opera, the "sanctifying festival for the stage" ‘Parsifal’, which also lends its name to Ilg's latest ACT album. "There are some overlaps," says Ilg: "The opening melody in the prelude to Wagner's Parsifal is similar to the famous double bass solo near the end of Verdi's Otello. Wagner completed many parts of his Parsifal compositions during his journeys to Verdi's homeland, before ultimately dying in Venice."

Ilg's past occupation with mostly German and European folk melodies took him to Wolfram von Eschenbach. The epos "Parzival" from the first decade of the 13th century is from him, and it fascinated Wagner and served him as inspiration. It deals with world religions, misunderstandings and irritations, with understanding and deliverance – themes that have obviously not become any less topical since Wagner, and that also affect Ilg. With this recording, the bassist is not forced to reinvent the wheel, but he is happy to be able to choose the path on which that wheel rolls.

On ‘Parsifal’ Dieter Ilg succeeds with an astonishingly logical, chamber musical reinterpretation of the opulent material. "The monumental becomes sensual and the sensual monumental," he explains, and demonstrates his seemingly unending creativity with impressive virtuosity and stylistic variability in each and every piece: The title of the first track "Zum Raum wird hier die Zeit" indicates the tone of the album - an intensive, suspenseful and masterly game with opposing extremes. The bombastic "Parsifal" motif alternates between the major and minor keys and is interpreted excitingly and openly; the hymnal is rendered playful; the "Klageruf" sounds less plaintive than demanding and mighty, the "Zaubergarten" enchants almost weightlessly, with light melancholy; Wagner's programmatic "Ich bin ein reiner Tor” is condensed with a driving groove and towers up dramatically. And it suffices to hear how the impressive "Amfortas" theme is introduced, varied upon, played around and injected with dynamism to see that this trio recognises the inexhaustible musical opportunities that classical music holds for jazz, and exploits them like no other.

Ilg approached his ‘Parsifal’ entirely without intellectualisation and free of inhibitions. There were almost no strict guidelines for his companions, "We go with our intuition and enjoy the potential of the moment" the double bassist explains, "That way the individual abilities of the musicians come out the best". Rainer Böhm masters the situational challenge spectacularly again, and with magnificent derring-do, as does the French drummer Patrice Héral, who once again melodically and sensitively integrates himself in a way that few of his fellow percussionists master.

‘Parsifal’ is definitely another masterpiece of improvisation, which surprisingly ends with another famous German composer: an almost breathy version of Beethoven's "Ode an die Freude” (Ode to Joy), Wagner is known to have been a passionate admirer of Beethoven. One of the focuses of his late work is the search for peace – both inner and outer," Ilg explains. "I would be happy if people hearing my Parsifal felt that peace of mind by the end of it."