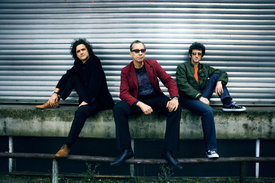 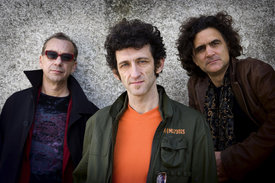 Depart – reloaded: More than a Comeback
The headline of one of the ‘Comebacks of the Year’ in the European jazz scene has already done the rounds. It’s true – ‘Depart’, the virtuoso Swiss-Austrian trio-powerhouse that electrified festival and club-audiences between 1985 and 1994, are once again touring the international circuit. However, when listening to the brilliant new chords the three band-members strike today, one quickly realises that to talk of a mere ‘return’ or ‘comeback’ does not do them justice. Reloaded is not one of those reunions where musicians, intoxicated by nostalgia, simply continue where they left off, with scant regard to zeitgeist and equipment that have long since developed further. Reloaded is a new union of three musicians with a shared past, a union of three personalities with sharpened profiles, who now relate the experiences they gained individually over the past decade to each other. And who, by doing so, are able to build on the invaluable asset of an instinctive assurance when interacting with each other.
There is Harry Sokal, born in Vienna, now longest-serving veteran of the Vienna Art Orchestra (VAO), and also one of the leading post-Coltrane saxophonists who, thanks to his superb melodic-harmonic understanding, is capable of overlaying chords with sounds, akin to a bird flying through the four seasons. And who, after groove-oriented band-projects in the 90’s (with Gerald Veasley, Matthew Garrison and others) has most recently delved deeply into the jazz-tradition as part of a trio.
There is Swiss bass-heavyweight Heiri Känzig - musically matured with Sokal in bands like the quintet of flugelhorn legend Art Farmer and the VAO - who went on to become the first non-French member of the Orchestre National de France in Paris, and sought-after accompanist to musicians like Thierry Lang, Kenny Wheeler, Paolo Fresu and Didier Lockwood. His latest venture, the large-scale project ‘Thien Shan-Schweiz-Express’, brought together folk musicians from Central Asia, Mongolia, Austria and Switzerland.
And there is Jojo Mayer from Zurich, as a very young, untamed ‘drum-stallion’ once merely ‘Depart’-back-up for Fredy Studer (then handicapped by a broken arm), but, at the very latest since his involvement in David Fiuczynski’s ‘Screaming Headless Torsos’ a cult figure and admired master of his trade (also in the New York scene), who, in projects like ‘Nerve’ and in the event-series ‘Prohibited Beatz’, has his ear very close to the ground of contemporary, computer-generated grooves.
And this shows: On reloaded the listener, between 15/4-, 9/4- and other time-signatures (‘Magic Transition’ and ‘Drei im Quadrat’ respectively) encounters changing rhythms created by an ‘analogue’ drum’n’bass-team, as well as a shepherd’s song from Kyrgyzstan (central theme of ‘Timeless Dreams’) and a Swiss folk-song ('Du liebä Bueb vom Ämmital'/'Sweet boy from the Emmental') whose yodel is interpreted by Heiri Känzig along the lines of 5/4, transforming the 'sweet boy' into a ‘bad boy’. Lyrical moments of calmness also bring the work to life, whereby Harry Sokal’s triad-heavy harmonizer-sounds could well be interpreted as distant echoes of the ‘Wienerlieder’ his father sang to him long ago, while Känzig works the bass-strings that have been specially prepared with clothes-pegs (‘Chlüppli-Groove’). The jazz tradition is represented in the form of earthy (minor-key/Blues-) bows to Charles Mingus and Eddie Harris, and in the form of a completely unknown tune (‘They say it’s Spring’) where the melodic contour, as well as the 10-bar A-part of the theme appealed.
This is undoubtedly the work of three musicians whose horizon has broadened in more ways than one, and who continue to be open to current trends. Three matured men who, on the one hand, are still capable of generating an enormous energy, but who concentrate equally on the elastic-delicate ensemble-mix and the importance of each individual note. To talk of a ‘Comeback’ appears to be quite an understatement.
Andreas Felber