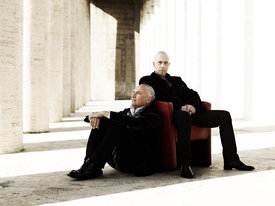 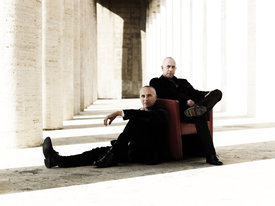 The world would be a more monotonous place if it weren’t for regional specialties, as exemplified by the Italians and their love for opera. The Roman pianist Danilo Rea seems predestined for this national passion, having studied classical piano at the music academy Santa Cecilia in his home town of Rome. Moreover, even after having devoted himself to jazz, he didn’t focus exclusively on American standards like so many musicians do, but concentrated more on merging the musical tradition of his native country with the vocabulary of jazz. This can be heard clearly on his ACT debut “A Tribute to Fabrizio de André” (ACT 9759-2) last year, on which he played music by this famous Italian singer-songwriter. According to Kulturnews the album is the highlight of ACT’s Piano Works series and it was even chosen as “Best Piano Album 2010” by the Italian jazz magazine “Musica Jazz”.

Nevertheless, it took quite some time before Rea discovered opera music: “If you start off as a classical pianist like I did, you usually don’t work together with singers. Only later did I discover how soulful my favourite composer Puccini’s music is and began to improvise with it. That is how I found my way to opera.” On his solo album “Lirico“ he had already found his personal way of transferring opera melodies into jazz. Thanks to a suggestion of his producer Siggi Loch, the new album “Opera” (his second on ACT) is fully dedicated to Italian opera. For this artistic adventure, Danilo Rea joins forces with Flavio Boltro, who belongs to the top league of Italian trumpeters alongside players such as Paolo Fresu and Enrico Rava. “We have been friends for many years and have played together occasionally. However, this is our first project together.” Boltro fits this project perfectly; he is also from Northern Italy and not only has he studied classical music at the academy in Turin and worked with symphony orchestras, but he is also open to different genres and willing to experiment with them. Boltro has proven this while playing with US stars Steve Grossmann, Don Cherry, Billy Higgins, Cedar Walton and Joe Lovano, in his own trio with Manu Roche and Furio Di Castro, as a member of the French Orchestre National du Jazz, with the avant-gardist Michel Portal, in an ethno-combination with the Moroccan guembri virtuoso Majid Bekkas and as a friend and accompanist of his fellow Italians, Stefano Di Battista and Rosario Giuliani. With their hardbop quintet he recently won the BMW World Jazz Award 2011.

From the very first note Rea and Boltro prove themselves to be excellent lyricists. The first piece of the album, Monteverdi’s “Lasciatemi morire”, sounds like a soundtrack of a Sergio Leone film. On most of the pieces Boltro trumpet has a classical, pure sound, which occasionally resembles a Bach trumpet (“Sinfonia dal Barbiere di Siviglia” by Rossini). Rea presents himself as a pianist with highly virtuoso touch and outstanding subtlety. Both of them are not afraid of high drama or big emotions: “Emotion is very important to me. I don’t like when people tell me the concert was “nice”. I’d rather have people saying that they were crying.“ Nevertheless, pathos should not take over the music. “For jazzy opera pieces you need a different approach than with other material,” says Rea. “You have to improvise in another way and keep up the classical sound, otherwise it might get kitschy. The most important thing is the respect for the melody. And you shouldn’t change the harmonies too much.” Rea and Boltro focus on the melody of the original songs and concentrate on the essentials - even on wild pieces such as “The Barber of Seville”. This is a kind of minimalism that Rea’s classical teacher Lilliana Vallazza taught him from early on. “She told me always to concentrate on the sound. If you press a key, do it profoundly. “

Despite the respect for the opera classics that is evident throughout the entire album, there is also lots of space for musical innovation. Being two of the most creative improvisers of the scene, Rea and Boltro constantly come up with exciting rhythmic variations. Classical music and jazz merge into one another, without ever sounding contrived or unnatural. A prime example is Rossini’s “Sinfonia dal Guglielmo Tell”, one of the highlights of the album, with its up-tempo feel and Boltro at his jazziest. Still, the focus always remains on the dramatics of the song. The pair succeed in creating the ideal combination of outstanding technique, astonishing arrangements and convincing improvisation.

The source of inspiration for this expedition into the world of Italian opera was Schloss Elmau in the Bavarian Alps, which has been a popular recording location for ACT-artists and is known for extraordinary jazz productions. All pieces were recorded there on the 9th of December 2010, four of them with a live audience. “It is the perfect place for this kind of projects. Not only because of the two incredible Steinway pianos, but also because through the huge windows you can see how it is snowing outside. The concerts at Schloss Elmau have a magical atmosphere!” The same can be said about this fascinating duo album