Christopher Dell
The World We Knew 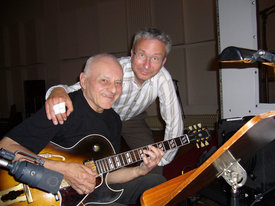 Everybody knows Strangers in the Night, one of the greatest hits of the 20th century. Yet, hardly anybody knows that the German composer Bert Kaempfert wrote the song. One can find his name credited next to a great number of world-famous titles. Kaempfert made music history and created a distinctive style with titles like Spanish Eyes, Danke Schoen, A Swingin’ Safari or the aforementioned Strangers in the Night, that facilitated Frank Sinatra’s furious return to the top of the charts in 1966.

The Hamburg-born composer, arranger and big-band leader Bert Kaempfert (October 16th 1923 – June 21st 1980) discovered the Beatles and produced their first recordings, he arranged for Elvis Presley, and helped Al Martino to his comeback with Spanish Eyes. His incomparable sound – dominant “knack-bass” figures (Ladi doubling the bass line an octave up on muted guitar), swinging rhythms, horns and a carefully created luminous background of choir and strings – created a stir all over the world in the early 1960’s.

All the greatest stars of American showbiz were crazy about Kaempfert’s work. Wayne Newton adorned himself with Danke Schoen; the great Nat King Cole celebrated a triumph with L.O.V.E. Jack Jones (Lady), Dean Martin (I Can’t Help Remembering You), Sammy Davis Jr. (Lonely Is The Name), but also Ella Fitzgerald, Shirley Bassey, Sarah Vaughan, Peggy Lee, Caterina Valente, Nancy Wilson – all of them had celebrated success with compositions by Bert Kaempfert. His hits have become evergreens.

In the year 1993, Kaempfert posthumously received the greatest honour that can be bestowed upon a composer: the acceptance into the American Songwriter’s Hall Of Fame.

Christopher Dell about THE WORLD WE KNEW
Kurt Weill, Hanns Eisler: the most noteworthy German songwriters of the 20th century. Here is another one: Bert Kaempfert. His melodies, atmospheres and his - then revolutionary - concept of sound and space have moved millions of listeners worldwide.
There is a unique quality to each of is compositions, that has fascinated me as a musical “problem” to be solved. Another musically interesting aspect of his work was Kaempfert’s way of interpreting music as a design object.
In approaching the music, it was important for me that we transport the compositions into a contemporary context. To achieve this, we tried to not let the aspect of space (Kaempfert) or structure (jazz) take priority; rather we focused completely on colour. This impressionist approach allows our music to become a statement independent of the original.
The pieces seem to become excavated monuments from far-gone days. They have the morbid charm of a ruined building, the beauty of which becomes apparent if we take a second look. The voices and the atmosphere that once filled these rooms with life sound out to us from its walls. The title “The World We Knew” takes on a whole new meaning in this context, and contributes an inner unity to our conception of a “considerate archaeology”.
There is one musician whose sound left its mark on Kaempfert’s music: guitar player Ladi Geisler. I’m very pleased that he contributed so much of his creativity and elegance to this recording.