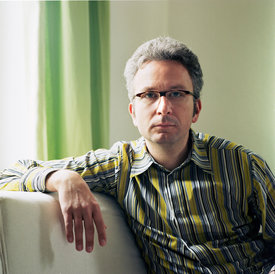 Christopher Dell currently lives in Berlin. The Reclam dictionary of jazz names him as the leading jazz vibraphone player of his generation. While he has developed a unique style characterised by maturity and a strong personality, Dell is a musician who moves effortlessly in and out between free improvisation, contemporary composed music and jazz.
He has worked as a soloist with, among others, the radio big bands of the WDR and NDR (based in Cologne and Hamburg), the radio jazz ensemble of the HR (based in Frankfurt), with Benny Golson, Kenny Wheeler, Lee Konitz and Bob Brookmeyer. He played in projects such as the Klaus König Orchestra, the Heinz Sauer Quartet, and the Theo Jörgensmann Quartet. Dell plays and has played concerts and tours extensively all around the world (in among other places Canada, China, USA, Japan, India, Africa and South America), and is featured on numerous CD releases. He has received a great number of prizes for his work, for example the Downbeat All-star Award, the annual German Record Critics' Award (Preis der Deutschen Schallplattenkritik), and the JazzArt-Award Music of the 21st century.
In 2005, Dell received the music award of the city of Darmstadt, which was presented for the first time in that year. The jury commission stated that he is “one of the most important improvising musicians in Germany”, and called the vibraphone player, composer and improvisation conceptualist Dell “without doubt the most interesting exponent of his instrument in Europe”.
In 2002, he released the book "Prinzip Improvisation" (“The Improvisation Principle”) and has been director of ifit, the “Institute for Improvisation Technology”, Berlin, since the year 2000.
Christopher Dell was appointed to the position of a lecturer for architectural theory at the University of the Arts (UdK) Berlin in 2006.