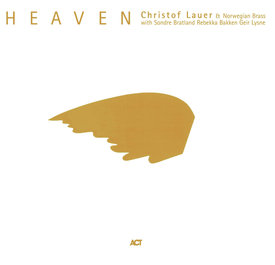 Recorded at Valerengen krike, Oslo, Norway, on May 29 and 30, 2003
24-bit-digital recording and mastering by Jan-Erik Kongshaug
Produced by Siegfried Loch

Christmas songs! Not exactly what you’d expect from Rebekka Bakken, the risk-taking shooting star of the exploding Scandinavian vocal scene, Christof Lauer, the equally stormy and thoughtful sound magician of all timeless post-post and pre-pre styles and Geir Lysne, the most important European reviver of the big band score.

This music will certainly not be heard on the third week of Advent in the lifts of department stores.  Which doesn’t mean that they approach the subject arrogantly or in an ironic deconstructive manner. They treat the spiritual templates between chorale and folksong with respect for the former aims and atmospheric uniqueness. The world-weary hits such as  "Jingle Bells" and "Oh Christmas Tree" have anyway been left outside in the blizzard. Lauer’s approach to this material is without affectation based on his emotional background. His musical mentor was his father, a pastor, who had perfect pitch, could improvise fugues and often substituted for the organist at services. Lauer was as a young man greatly impressed; he continues to appreciate the complete range of church music.

Geir Lysne has set wondrous arrangements for brass performing  with classic beautiful sound, the ensemble being partly made up of members of his own regular band. With their controlled dynamism, their bold voicings and original handling of dissonance they rarely leave the dignity of the church setting, even when the bright tones predominate as in "Kommet, ihr Hirten", a fairytale polyphonic reworking of the main theme.

The technical arrangements show a great variety. The voices of Rebekka Bakken and the Norwegian folk star Sondre Bratland both appear twice, singing in their mother tongue. Only one ("Nun kommt der Heiden Heiland") is reasonably well known. The other pieces are instrumentals, retaining sometimes the statuesque character of chorales, playing with melodic fragments, without quoting ever the theme in its original form ("Joseph, lieber Joseph mein"), antiphonic acclamations produced between the choral lines and the free commentaries of Lauer ("Gelobet seist Du, Jesu Christ"), or pushed forward with all imagination of the arranger into the area of the symphonic paraphrase ("Es ist ein Ros’ entsprungen").

It would be wrong and irrelevant to recommend one track in particular, where every track is different and has its own character. But we’re going to do it anyway – track 3 "Overmåde fullt av nåde", because on this one so much comes together so compellingly: the silvery sound of Rebekka Bakken’s voice, first alone, then accompanied by the full horn arrangements of Geir Lysne and finally led by Lauer’s carefully starting soprano saxophone to expressively rising collective improvisation.

This Christmassy present will survive the festive season in a way that no other CD could.