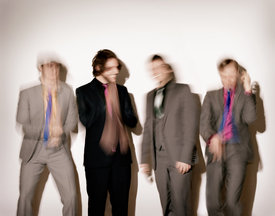 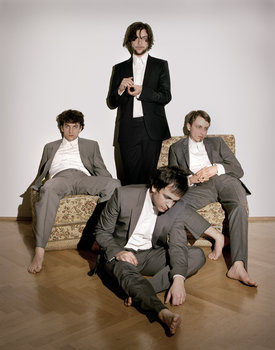 In 2005 ACT began the Young German Jazz series as a forum for the young and extremely energetic German jazz scene. With the first release of the [em] Wollny / Kruse / Schaefer trio, the idea was immediately greeted with a strong national and international response. The YGJ concept of nurturing and promoting young talented up-and-coming German musicians and giving them a fair chance on the international scene had caught on.

In 2008 ACT will be treading on another Young German Jazz borderline. The motto: crossing frontiers. As with many of his young colleagues, Chris Gall has had his own personal affair with rock and pop music – they are as much a source of inspiration for him as the Great American Song Book. And you can tell simply by its name that the band Panzerballett has a casual attitude towards its own history, an attitude that is reflected in how they approach the various musical genres. They both effortlessly transcend supposedly insurmountable barriers and transform that art form called jazz into something that is once again sexy and exciting – also for a young audience!

Chris Gall laughed when he was congratulated on his debut album for ACT’s Young German Jazz series. “Actually I’m not a pure jazz newcomer. There are a lot of other things that I like too.”

Hard to say what he meant by that. Perhaps he was referring to his schooling in classical piano that began in Germany when he was five, or his studies in Boston at the Berklee College of Music. Perhaps it’s simply a music career in which jazz was always a starting point but never the end-all.

It makes sense, then, that Chris Gall’s alma mater Berklee has always been more than one of the world’s best jazz factories – it has always considered itself a school for “contemporary music”. Berklee’s alumni and at the same time Gall’s roll models include not only such jazz musicians as Joe Zawinul and Danilo Perez, but also rock star Melissa Etheridge, song writer John Mayer, and film composer Alan Silvestri.

Gall’s musical inspiration comes from every corner of the world: out of Boston’s musical melting pot, out of Brazil exploring the Favelas of Sao Paolo, out of India where he and sitar star Shakir Khan proceeded to dust off Euro-Indian jazz. And you can include the loud rock stages in Germany, Austria, and Switzerland, intimate jazz clubs, and theatre revues.

From all these places, the 32 year old took what he needed to drive his music forward: strength. “Sometimes I even find myself somehow crawling into the piano,” says Gall. In “Everybody Knows But Me” he surges forward with such force that it would make rockers weak-kneed with shame, and jazz musicians wide-eyed with wonder at how wild and danceable their music could be.

But there’s even more: funk, groove, pop, large gestures and small arabesques. Gall has composed all the pieces on Climbing Up, compositions that are trimmed of all excess with every element to the point and in its proper place. In the melancholy “Life Is Like Weather”, for instance, he transposes the title into the motto of its last bars by leaping from the rain to the sun, from elegiac strains to funk and swing. It’s easy. “Life is like weather” – the clouds can be spontaneously swept away.

And while Chris Gall would rather contemplate his music than genre borderlines, with Enik he has grabbed hold of a singer who for his part leaps over borders. The charismatic young singer gave his celebrated CD debut with “The Seasons in Between”, a mixture of avant-garde pop and electronic rock with which he has already been able to fill the larger concert halls. But he also performs the songs of the well-known Austrian cabarettist Georg Kreisler on Munich’s smaller stages. For those who are a little older, Enik will undoubtedly awaken memories of a young David Bowie.

Drummer Peter Gall and bassist Marcel Krömker have their own sound, and nevertheless have no problem fitting into Gall’s musical concept. “My brother is closest to me musically – he witnessed the development of my music first-hand”, says Chris. And at the age of 24 Peter had already had success with his band Subtone. That’s also the case with Marcel Krömker who has made a name with, among others, Pär Lammers Trio and as the leader of his own project, Mr Eart.

Many young German jazz musicians have found camaraderie with their European colleagues in their search for truth within the various styles, the search for their own individual sound, the search for something that is truly new. On Climbing Up it sounds like at least one has found what he was looking for.