Carla Marcotulli
How Can I Get To Mars? 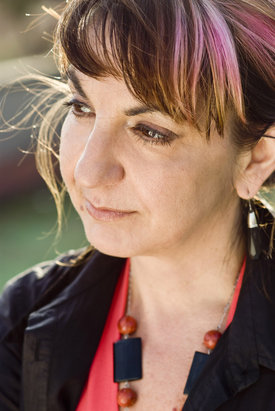 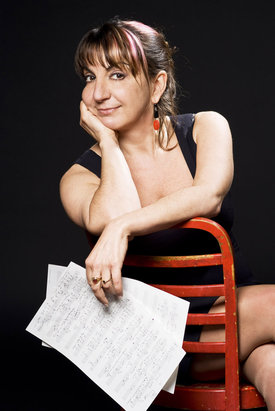 In music one plus one can sometimes equal three – for instance, the sum of a project is often more than the value of its individual participants. A perfect example: the collaboration of the Italian singer Carla Marcotulli with the American composer, arranger, and multi-instrumentalist Dick Halligan for their first ACT album How Can I Get To Mars? (ACT 9720-2)

Carla Marcotulli comes from a musical family. Her father was a sound engineer with his own studio in which, among other things, a lot of film music was recorded, including a good number of scores from Ennio Morricone. While sister Rita took piano lessons – today she is one of Italy’s most renowned jazz pianists – Carla began playing flute. Coincidently, her music school also had a gospel choir and a jazz big band. Carla recalls that, “It was rare to have either of these in Italy in the late 70’s.” She quickly showed that a lot of music had rubbed off on her during her many visits to her father’s studio, especially her feeling for melodies and her ability to sing naturally. Things started happening quickly. At the age of 19, Carla sang with Chet Baker at the “Four Roses Jazz Festival”, and later in the same year with Carmen McRae. ”I was a wild kid, and only a lot later it became clear to me what that meant.” The Roman jazz club “Music Inn” became her second home; it was there that she ended up singing with half the Italian jazz scene.

However, she felt there was something missing, and that it was time to work on her musical abilities. Carla determined to study classical singing in Venice, and consequently performed in operas from New York to Puerto Rico. But her return to jazz was just a matter of time. “Always being told how to sing music made by others was too monotonous. I wanted to have more freedom, and also be able to try out some of my own things.” Among other things, she joined Klaus Treuheit’s experimental trio “Neue Note”, worked with trumpeter Luca Bonvini on a Walt Whitman project, and presented “Canzoni dell’amore imperfetto” at the Umbria festival, a project created in conjunction with author Domenico Starnone and saxophonist Mario Raja. Two years ago Marcotulli began to work on a synthesis of classical and jazz with violist Antonello Leofreddi along with his Quartetto Dorico, and famed jazz guitarist Sandro Gibellini. But the project’s final alignment came only after Marcotulli had met Dick Halligan and then played with his band on several occasions.

Halligan’s name will always be connected – both a curse and a blessing – with “Blood, Sweat & Tears”. In 1967 Dick was trombonist with and one of the founding members of this ground-breaking jazz-rock band. He was one of the most important songwriters on the group’s first four albums; these recordings have remained their most successful and influential. Already back then, Halligan’s Grammy-winning “Variation on a Theme by Satie” demonstrated that he was a classically trained composer with an enormous range. After leaving “Blood, Sweat &Tears”, he was especially successful as a composer for film music in Los Angeles. Now 65, Halligan retreated to Italy a few years ago in order to devote himself exclusively to composing.

This CD has become as multifaceted an endeavour as Marcotulli’s and Halligan’s careers. There is a successful synthesis of different musical elements in Halligan’s riveting melodic songs. Halligan states that, “On the melodies I arranged the strings in a very classical way. The jazzy part mainly comes through Sandro Gibellini’s guitar.” And naturally through Carla Marcotulli’s voice as she swings through every combination and language. In addition, on Tony Scott’s “Lady Day” there is a sophisticated homage to their mutual musical influence, Billie Holiday. There are also two standards (“I’m Through With Love, and “I Get Along Without You”) that appear in a new classically-coloured light. Alongside the string-dominated arrangements, there are five pieces played in typical classic jazz combo combinations (“I Look At You”, for example), from duo through quintet. These tracks were recorded in California with Dave Carpenter on bass and world-renowned drummer Peter Erskine, while Halligan himself took over on piano. Carla’s sister Rita contributes two songs to the mix. At first one of them was just a little eight bar piano motif, but Carla’s son constantly tapped and played the melody until the tune became known as “Rocco’s Rhythm”; and in its final version it provides a dazzling illustration of Carla’s unique scat singing and Dick Halligan’s arresting arrangements. It’s a case in which two plus one equals a lot more than three.