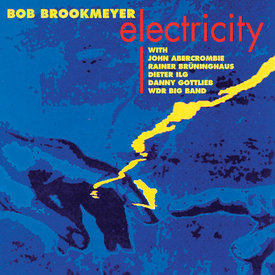 "My attraction to the guitar began in the mid-1950´s, with Jimmy Raney and Jim Hall as frequent partners in my musical life. In the mid-1980´s, an equally strong fascination began with the synthesizer, and its use in conjunction with acoustic instrumentation, often as a unified sonic entity. John Abercrombie had become one of my "new" favorite guitarists by then, and his interest in sound manipulaton - along with his broad range of musical language - made him an ideal choice for this project. His musical gifts were a strong contributory factor to the piece, and his strength and goodwill gave us all inspiration. This was also my first chance to work with Danny Gottlieb, something he and I had looked forward to and he also is a giver of good feelings, good energy and willingness to become part of the ensemble.

I am in Cologne every year with new work for the WDR (now some 14 or 15 times!) and felt that a slightly reduced instrumentation would make more of a chamber music setting. Structurally, this is a child of "On The Way To The Sky", done in 1989 with Jim Hall and Mel Lewis. By that time I had become interested in limiting the number of voices used and in increasing the horizontal aspect of my work. "Sky" had only 3 voices, or lines, and "Electricity" usually has no more than 5. I have also grown more patient in my work, taking longer with exposing and developing ideas. Maybe it´s getting older or living in the countryside or being, at last, happily married - whatever the reason, I think that I´m looking more for meaning and worrying less about coloring the orchestra and keeping "busy" with the music.

Musically, a big "thank you" to Rainer Brüninghaus and Frank Chastenier for some inspired synthesizer work and Dieter Ilg for his always supportive bass playing. A special word of appreciation for Siegfried Loch, who heard a tape of this piece and renewed my interest in it. Much of what we all do in Cologne is never heard elsewhere, so this is welcome exposure. He also asked me to update you on my recent, current and future activity, so here is a brief summary.

"Electricity" was my last New York piece, for after it was done, I moved to Rotterdam (Holland) to start a new school, now  put aside. I have a European Quartet (featuring my pianist, 26 year old Belgian Kris Goessens). I will have my first opera premiered in Wuppertal, Germany in late 1996 and this summer I became Musical Director of a large ensemble at the Schleswig-Holstein Musik Festival in Lübeck, northern Germany. In January 1996, I will become Chief Conductor of the Danish Radio Big Band. We (Mrs. B. and I) are building a house, deep in th woods, in Hanover, New Hampshire, just on the Vermont border, so - in future years - don´t be surprised at a few C major triads here and there. Since my heart belongs in both Europe and America, I´ll be around.

In closing, a very special word of gratitude to the WDR and, the two producers who have so kindly let me work, learn, experiment and grow - Heiner Müller-Adolphi and, since 1987, Wolfgang Hirschmann.  A producer can cause much good to be done in the world, and these two men have done a wonderful job. As always, my friends in the band work hard, stay patient and "play their schnitzels off", translated loosely from American slang. See you later.