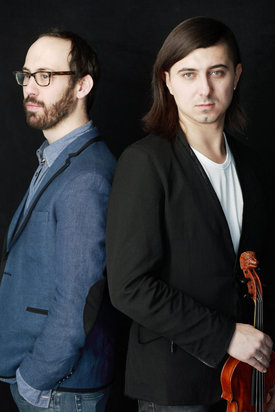 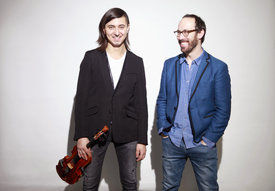 Mixed and mastered by Klaus Scheuermann

"Without doubt the greatest jazz violinist alive today. We can expect everything from him," is what the Frankfurter Allgemeine Zeitung newspaper wrote about Adam Bałdych's ACT debut "Imaginary Room". The young Pole is causing quite a stir on the European jazz scene with his music. In Germany he won the ECHO Jazz in 2013. In his homeland he is treading in the massive footsteps of Leszek Możdżer, and the top echelons of European jazz, the likes of Iiro Rantala, appreciate his skills, currently in his string trio. Musikmarkt calls Bałdych a "diabolically divine violinist" and the Süddeutsche Zeitung considers him "one of the biggest discoveries of contemporary European jazz".

The Paris-based Israeli pianist Yaron Herman has long been at the spearhead of European jazz, and he is "one of the most creative minds in the jazz world" (Kulturnews). Bałdych came across this pianist "who can quite simply play everything – and everything always differently" (Süddeutsche Zeitung) quite by chance: Siggi Loch put them on the stage together for the first time at the "Jazz at the Berlin Philharmonic II" concert in March 2013.

The chemistry was right from the outset. Two big musician personalities had found each other, and they simply had to continue on the same path from that moment on, a path called "The New Tradition": an expedition that cuts a new trail leading off from the beaten track. With total mutual trust,  Bałdych and Herman set new standards in contemporary jazz. Seldom has a more intense and natural collaboration been heard. Not in a struggle for supremacy, but instead masterfully and highly emotional, full of depth and soul, Bałdych and Herman simply make music. And in doing so they prove that you don't need big ensembles to create magic moments.

Making music has always been a way for me to fulfill my dreams, to challenge myself and to travel through uncharted lands. The stories of those lands, filtered through my personality, is what I share in a musical form with my listeners. After the release of my previous album, “Imaginary Room”, I had the opportunity to share the stage of the Berlin Philharmonic with Yaron Herman. It was an extraordinary, magical moment for me. I felt as if I have taken a deep breath and have found new impulses. A very classic duo of violin and piano turned out to be astonishingly fresh and opened up new creative possibilities for me. By scaling back and using only two instruments I was able to showcase my music in a very detailed view, to focus on the music's structure, its' colour, the vibrations of the strings, the whisper of the bow.

The theme of “The New Tradition” album is a very important one. Tradition is my point of reference. Who am I? Where do I come from? Where do I go? Classical European music, Polish folk-music, Polish jazz – this is my tradition, this is what surrounded me in my formative years and this is what my music refers to. This album is another dream fulfilled, one that I would like to share with you.